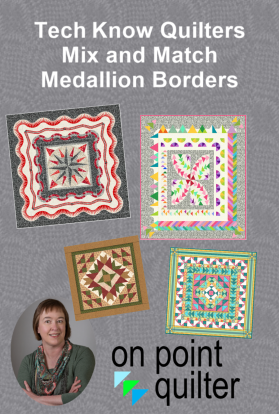 Medallion quilts allow us to design a stunning center block and then allow us to complement the block by adding borders. During this session we will focus on the borders.

​This class is focused on first designing borders using some of the basic border tools in EQ and then advancing to creating your own semi-custom layout. We will them cover how to make borders that are actually easy to piece along with creating continuous borders such as clamshells and braids.

Note: This purchase entitles you to the Mix and Match Medallion Borders series of Tech Know Quilters. ​If you would prefer to join the monthly membership program for $34 per month, click here to be placed on the waiting list to be informed of the next open enrollment period.

1. Getting Started and Using a Photo for the Medallion Center

5. Build Your Own Semi-Custom Layout